Today was all about an everyday issue: discernment. As our resource person, we were blessed to have Sr. Maria Theresia Hörnemann. While she shared with us from her broad experience as a congregational leader and former formator, she also invited us to draw from our own experiences and resources.

Discernment is at the very heart of our spirituality. Already in the writings of Arnold Janssen we find helpful criteria for a good discernment, such as: Is the project necessary for the kingdom of God? Are the necessary (professional) personnel and material resources available? Have enough research, reflection and especially prayer been done in order to arrive at the right decision?

Discernment is essential to our identity as Servants of the Holy Spirit. The 10th General Chapter in 1990 states “being led by the Spirit, discerning the movements in today’s world” as one of five essential criteria to describe who we are as SSpS. The 11th General Chapter in 1996 points to the prophetic dimension, when describing us “as women who know how to live in a spirit of discernment in mission, for mission”. Since the 14th General Chapter, special attention has been given to the aspect of communal discernment.
Even though we often speak of discernment in front of greater decisions, it is actually not only an official process or method. Rather, it is meant to be a way of life. “If that is missing, we are not a SSpS”, Sr. Maria Theresia concluded.

Sr. Maria Theresia invited us to take some time for personal reflection on our own experiences with personal and communal discernment. We were asked to recall both a positive and a negative experience of discernment, and to name some of the factors that contributed to it. After sharing these points in our basic groups, we came back to the plenum to share them with all. As so often these days, when gathering the harvest of our sharing, we found many commonalities, among them some of particular centrality. As for the aspects that contribute to a positive discernment, these were: prayer, having access to the information needed, and openness towards each other and the process. Among the negative aspects, the following were mentioned most often: fear, lack of time, a set mind that is not open to reconsider and change.

In the afternoon we again split into basic groups. To each group a different stage of formation was assigned, from vocation promotion up to “discernment as a way of life”, i.e. ongoing formation. In groups we discussed about important aspects to which to pay attention and noted our upcoming questions. Again back to plenum, we started to present the results and immediately got into discussion about daily issues and concerns. The time passed by in flight and we didn’t manage to go through all the stages. However, we hope to continue our sharing some time in the coming days.

Even though not all questions may be answered to full satisfaction within these days, still, these very questions give us some direction where to focus on, as Sr. Maria Theresia noted. Despite our name, Servants of the Holy Spirit, we may not yet be experts in discernment. However, with Sr. Maria Theresia, we hope to continue growing into it, due to our identity as SSpS. 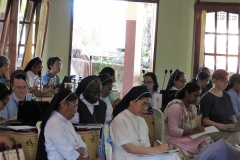 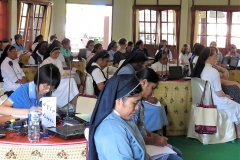 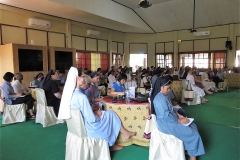 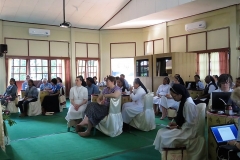 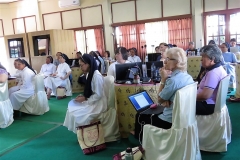 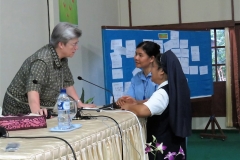