Technology and Social Media in the SSpS

Today’s morning session was dedicated to “Technology and Social Media in the SSpS – A continuing journey of discovery and adventure”.  Sr. Marides Santos, head of the communication office in Rome, gave us a broad and stunning introduction into the world of Information Technology. It was significant, though, that she started with a personal sharing on the importance of rootedness in identity and values. These two essentials, as it were, serve as a guide as we navigate through the inventions that technology brings forth.

At the beginning of this first week, Sr. Marides had asked us to participate in a survey on technology and social media. Today she presented the results to us. As the survey reveals, out of 46 participants of the survey, 38 are using a smartphone. The most popular social network among us participants is whatsapp (75% of us are using it). On the list of worldwide top 10 social networks, it only takes the second place (following facebook on number 1). Thus, social media is part of our daily life, and, at times, it can occupy a very big space in it. Psychology speaks of an internet addiction disorder when one’s habit of using the internet significantly interferes with one’s work, family/community life, and daily living in general. Being online, then, becomes the main preoccupation. In such cases, professional help is needed. However, there are also less severe patterns of internet use, which still call for attention. In such cases, a “digital diet” is needed.

“If I value community and, yet, overdo my use of media at the cost of what I value, then something is wrong”, Sr. Marides concluded. She stressed the importance of personal responsibility, once we realize that something about our use of social media and gadgets needs to be changed. Further, we also are co-responsible for the formation of our fellow sisters. Thus, responsible use of media is an issue that asks for consideration in all levels of formation, ongoing formation included.

As regards the world wide web, a “paradigm shift” has taken place: Online communication is as much a missionary ministry as socio-pastoral work. Yet, conventional media (as brochures, posters, and the like) still need to be kept alive, as Sr. Marides insisted. With reference to communication at the time of our first mothers (in form of letters, newsletters, mission magazines), she was concerned to convey us, that “change constantly happens, but the importance of communication remains”. Her encouragement was clear: “We need to keep exploring ways of communication among ourselves and with others”.

One means of doing so is the “SSpS communication plan”, developed by the communication team, and covering the years 2015 to 2020, i.e. until the next general chapter. One implementation of this communication plan is that by now every region and province has assigned one sister as communication coordinator. Another project, still to be undergone, is the establishment of a communication policy, which shall serve as a congregational guideline on how to use social media. The development of a common public SSpS image (logo, colours, font) is another defined goal.

After a very enriching morning session, we took time for a “shepherd’s recollection” in the afternoon to review our first week and reflect on our learnings. While having our supper later after mass, we accidently got to experience another, yet unmentioned use of technique and gadgets. Suddenly the lights went off (no electricity!) and we were sitting in the dark. However, faster as candles were brought, some of us had already made use of their smartphone – as torch!. It remains, however, true, that the warmer light radiates from a candle… 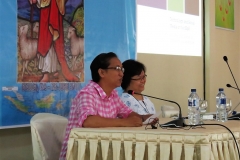 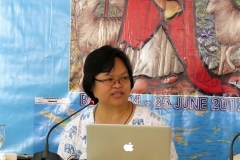 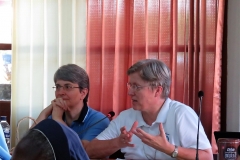 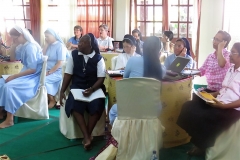 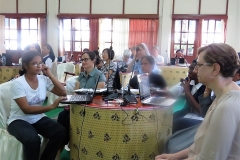 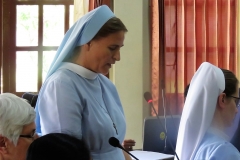 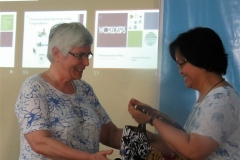 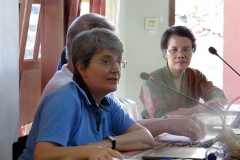 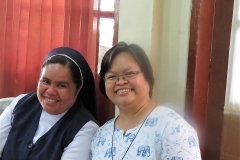