I was in Athens in an SSpS community working with the Jesuit Refugee Services for nearly 4 years.  I left Athens  on 1st August 2022 and I am now in the English/Irish Region and I would like to share some reflections and show my gratitude for the support I received.

I left Athens with a heart full of stories and faces of people and I felt like I had journeyed along with many families in many circumstances.  They were mostly from Afghanistan, Cameroon, Iran, Congo and some individuals from Chechnya, Russia, Ukraine, Morocco, Lebanon and Egypt and some from Turkey.

It’s not as if they passed through my life and they are gone.  I have followed them through to their new countries and know they are safe.  I am amazed by the resilience of people and how they keep hope, when hope was gone, and keep safe when there was plenty of danger. It had to be God hearing the cry of the poor.  This is just some of the many stories:

A Mother With Two Girls

In the JRS education centre I met a mother with two girls from Afghanistan. The girls were 10 years old.  The mother was coming to brush up on her English to get support and get the girls some education.  It took time for her to trust us and slowly she shared her story of abuse from her husband, who was a drug addict, chasing her to Greece while the mother and children were trying to run away from him.

This mother had been working in a bank and was educated and so she had English. She was crossing from Afghanistan to Iran over the mountains and she was injured in the hip and she is still limping.  We all supported her in advocacy and education in JRS and tried to protect her from her husband. Eventually she got divorced and he disappeared from her life.

As with many of the refugees, Greece was not the place where they wanted to stay and she dreamt about Sweden.  With a fake passport they were trying to get through the gates.  One of the girls went through. The mother and other girl were stopped.  What a tragedy.  A mother and one daughter and one daughter separated.  They ran back to us.

The daughter who went through was helped beautifully on the other side.  A Swedish family fostered her and allowed her to be educated and live happily with the family and this daughter was in touch with her mother and sister through WhatsApp.  The mother and the daughter continued to struggle.

They were persecuted by the government for smuggling the daughter out of the country as a minor, so it took them more than one year before they were united.  The daughter in Greece went to a Greek school and learnt Greek.  In February this year they were allowed to go to Sweden and be together as one family in a camp.  They still keep in touch with me and send me happy pictures of themselves as a family and dream of coming to Greece one day for a holiday!

I met him in our charity shop.  A man speaking Russian.  A philosopher.  A chatterbox talking about living in the park in Athens.  Not complaining. Kind of happy for this experience in Greece.  Hoping to establish himself somehow but since he was from Chechyna he was not on the list to get asylum.  He ate in Caritas, got clothes from us and attended the education centre and we became his friends.

Police station in Athens where a Chechnyan refugee was detained before sending him to the detention centre.

During the covid lock-down everyone is supposed to be in a house.  He didn’t have a house so every homeless person was visible in Athens. The police arrested them and he was one of them.  He was kept in a cell with 9 people without a window and very little food.  We supported him by giving him bread and telephone cards so he could keep in touch with us.

After a while he was moved to a detention centre where many refugees are kept. We could not speak to him but we could go and give him, through the police, only some money and telephone cards.  No food.  Sometimes they would allow us to give underwear and socks.

These people were in the process of deportation from Greece.  This man was hanging on to the hope to stay in Europe but eventually they did deport him to Moscow and from there he got back to his mother.   There he could rest, get back his strength and he called back to us to say thank you for our support.  The mother was very grateful that she has her son back. She is over 80.  At the moment he is working in a shop dreaming of coming back to Europe.  But he has a stamp in his passport that he may not come back to Europe for 5 years.  His dream therefore is England!

A Mother with a Boy

I met her in the shelter of the JRS.  That time we were running a shelter for refugees for around 50 people, among them many mothers with children.  When I saw her I noticed she was depressed.  She had a beautiful young boy about 3 years old.  I started by interacting with him daily.  Then slowly because of the language barrier I tried to become friendly with the mother.

The mother started learning English with us and through google translation – Farci to English – we could communicate. Then I found out that she was from Afghanistan and she was traumatised by the death of her husband and her daughter being beheaded in front of her by the Taliban.

Slowly through our JRS project we helped her work through the trauma.  She had run away to Iran with her little boy to save their lives.  From there they got to Greece.  An unimaginable journey.  When she arrived eventually in Athens she was helped by us in the shelter.

When she was feeling better she moved to an individual house run by Caritas and tried to live independently and at the moment she is living with the cousin of her husband in Germany with her little boy.  He moved to Germany much earlier than she did and supported her and the boy financially in Greece and then asked her to be his wife and he will adopt the boy.

The Lord Hears the Cry of the Poor

These are only 3 stories of people and there are as many stories as people who are trying to escape trauma, abuse, war and injustice.  The news always focusses on the negative side of the refugee story, like people ending on the street in Athens being addicted to drugs and slowly dying.  But there are as many positive stories that I treasure in my heart. One of the volunteers from the Jesuit Refugee Service with children in Victoria Square. Clothing and basic household needs are given to people in need. We had over 2000 people registered in the JRS Centre. The work with children help them to cope with trauma.

The Lord hears the cry of the poor! Our presence in Athens or anywhere we work might seem small and insignificant in our eyes but you can see from the stories that small miracles happen daily. 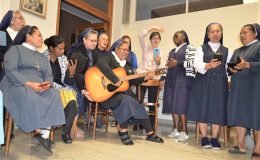 World Sunday Mission: “You shall be my witnesses” 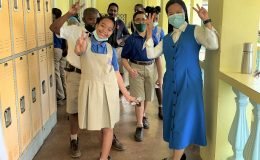 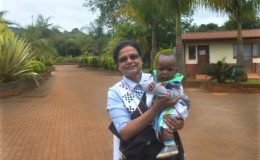 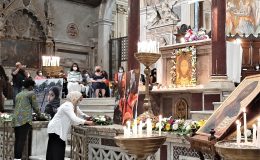