“The Situation Made Us Corageous and Stronger”

“The Situation Made Us Corageous and Stronger”

I was privileged to visit our sisters in Ukraine from October 1 to 6, 2022. It was a powerful and graced time. I would like to take you along as I remember my pilgrimage in Ukraine, so that we can appreciate, support, and pray for our sisters who serve the people in this beautiful yet suffering country.

I arrive late on the afternoon of October 1 at the airport in Krakow.  Sisters Maria Martha and Katja pick me up and we drive from the airport to Ukraine.

My first impressions are of a vast, beautiful and very fruitful country. The forests are in autumn colors. The fields of wheat, corn and sunflowers are huge, and the earth is black and very fertile. Ukraine is one of the main wheat producers in the world and under normal conditions plays an important part in the food security of the world. The roads are wide and in good condition, at least in the part that now is not directly affected by the war.

That evening, we are stopped several times as we would be throughout the trip. Occasionally, before entering a village or city, we need to pass a military checkpoint, or we see the blockades at the road sides which were intended to stop the Russian tanks.

Our sisters decided to remain with the people

The Ukrainian people stand up against the invasion of Russia and are determined to defend their country. They are very courageous, and so are our sisters who have decided to remain with the people, be it either within the country or in Poland. Some minister in Ukraine to the many who are fleeing the war-torn zones to other regions or to other countries. They provide them with a mattress, food and medicine.

Others moved out to help with the refugee situation at the Polish border, welcoming exhausted women and children, seeing fathers and sons under dramatic circumstances saying goodbye. While the women and children were brought to safe shelters, the men had to return to take up arms.

The situation is extremely complicated. Many families are mixed, e.g. the father is Ukrainian and the mother Russian or from Belorussia. One of our parish members has two sons who for years are already in Russia and they are professional soldiers. They must fight against Ukraine. On Sunday morning, we attend Mass at our parish in Verbovets. Afterward, I meet with some of the parishioners. Among others, I speak with a woman whose grandson was an altar boy in the parish and whom our sisters saw growing up. He was killed aged 19, one of the first victims of the war. His grandmother is still in deep grief.

We have a community in Kyiv. One sister shows me this beautiful city with the old Orthodox churches, the Independence Square where the Maidan revolution started in 2014. I see an ocean of blue-yellow flags. Each flag stands for one person who gave his or her life in the fight for freedom. I see a huge memorial wall with thousands of photos of young handsome men and women. They were born in the 70’s, the 80’s, and the 90’s. They are all gone in this senseless war. It is heartbreaking.

The most difficult part of the journey is when we visit the area of Bucha and Irpin which had been occupied by the Russians. The destruction and the atrocities which were committed are just unimaginable and against every standard for humanity. There are the visible wounds of destroyed buildings and a cemetery of burnt-out vehicles. Yet more serious are the inner wounds of the massacres and random cruelty. The people are deeply traumatized. The cemetery of Irpin with its hundreds of fresh graves gives witness to so many that had to die. For what? To defend the land? No. One of my sisters corrects me: “For freedom, for the freedom to choose our way of living.”

One of our sisters is staying in Borodianka, a little town close to Irpin. We visit an area with container houses. This is a temporary housing arrangement made of many shipping containers like those used on trucks and trains for transporting cargo. They were built for emergency use by a Polish organization for those who had lost everything in the bombing. Several hundred people are living here together door by door with little space. People fear the winter cold because the containers are not fit for freezing temperatures. Many of them have lost their work and income. It is a challenging situation where conflicts easily arise among the inhabitants.

In Kiev and in Khmelnytskyi I hear the warning alarm in the morning. Our sisters and the people don’t react. People got so used to these alerts that they simply ignore them and continue their work. Afterwards, we read in the news that two rockets had hit the area of Khmelnytskyi. One fell into an open field, and the other did some damage to a building but – thanks be to God – not to persons.

I have the opportunity to meet all our sisters in the different communities who are presently in the country. We have deep conversations about the situation, how our sisters experience the situation, how it changes their way of living, their understanding of our mission, and how it affects them spiritually. It is amazing, but our sisters clearly say that they became stronger and more courageous in this very difficult situation. They are exploring new apostolates – for example, the container village, the service to refugees and with soldiers.

After the initial shock and disbelief that this war is happening in the 21st century, they became very active – providing shelter and other essentials for life for those on the move. Now the situation starts to normalize somehow. Our sisters and the people learn to live with the situation and try to make the best out of it. There remains the huge insecurity: how will the war develop, and when will it end? When will there be peace again? And surely there is a huge need to deal with the trauma, loss and sadness of war which will be a task also when the arms are laid down.

I feel deeply touched by the courage of our sisters and how they are dealing with this difficult situation. They really have grown in a very challenging environment, and they keep serving the people. They all want to stay and be with their people. For them and the Ukrainian people, this war is a fight not only for their land but for the freedom to choose their way of life.

May our Good Lord protect our sisters, bring an end to this terrible war, and grant peace and prosperity to Ukraine. 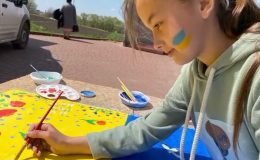